Dip a Day December is back

Dip a Day December returns as temperatures drop and festivities increase. While many are enjoying the cosy delights of this time of year – roaring fires and mulled wine – some of our OSS members are taking to the water every day, despite the shorter days and cooler water.

Dip a Day December started last year when OSS Team Member Ella Foote swam daily to raise money and awareness of homelessness. She raised £3,730.48 for Crisis UK last December while dipping in mostly rivers and lakes near her home in Berkshire. This year Ella is at it again, this time raising awareness of mental health and supporting The Blurt Foundation’s Instagram Challenge to a Merry Calm-ness. You can follow her daily swims on Instagram by following @ellachloeswims.

But this year Ella isn’t alone, she is joined by Yorkshire swimmer Angela Varley who has also taken up the challenge to dip every day in December. Angela is raising money and awareness for a local charity to her, Destitute Asylum Seekers Huddersfield (DASH). 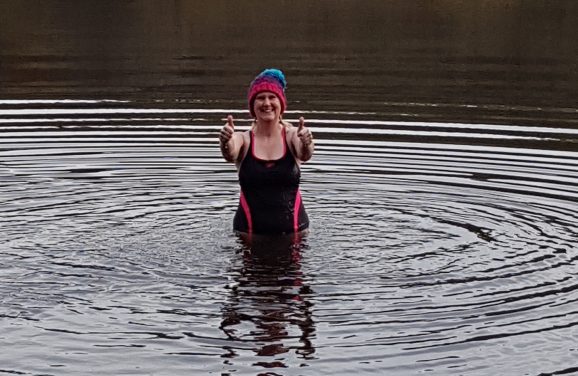 “DASH helps people who have fled their countries in terror but are still waiting to be accepted as refugees,” says Angela. “I’ll be swimming outdoors every day in December – rain or shine, hail or snow! Last year DASH helped 42 destitute asylum seekers get Leave To Remain, assisting them in rebuilding their lives and giving them hope for their futures. Just £5 would buy a hot meal and food parcel, £10 would cover a week’s destitution payment and £20 would pay for a week’s accommodation.”

Angela has already raised an amazing £903.50 and with her target set at £1,000 you could help her hit her goal. Visit: mydonate.bt.com/fundraisers/angelavarley to support.

Meanwhile in Oxfordshire, artist and swimmer Helen Edwards continues to dip daily. Helen has swam every day this year since Winter Solstice in 2016. She took on Dip a Day January to raise money and awareness of homelessness in Oxford and then didn’t stop. “Initially I said I would swim every day in January, but it became so enjoyable, I thought – why stop?” says Helen. “Being outside in nature every day I realised how much I was feeling really nourished by winter. We don’t think of winter being very nourishing, it is a time when things die away, but I felt the opposite.”